Rodenticides (rat poisons) are important products for controlling rodents that pose health concerns to people and endanger crops, animals and food supplies. However, these products pose severe safety concerns in pets and people. After reevaluating the health effects of rodenticides, the EPA (environmental protection agency) announced control measures to reduce the risks of these products to children.

These changes greatly affect the veterinary sector and how we are able to treat pets that have ingested rodenticides. Rat poisons have two different categories of active ingredients: long acting anticoagulants that cause severe bleeding and neurologic ingredients that cause seizures, neurologic paralysis, and death.

Because of the new regulations, the likelihood of your pets ingesting the anticoagulant form will lessen and the risk of the neurotoxin will increase. The anticoagulant rodenticides are treatable with vitamin K. The effects are reversible and can generally speaking be controlled without drastic measures.

With Bromethalin there is NO ANTIDOTE. Bromethalin can lead to seizures, paralysis, and brain swelling (cerebral edema). Signs of these neurologic effects can be seen as soon as a few hours after ingestion. This is a very rapid onset of illness. The bromethalin can cause paralysis of the muscles that are used for swallowing, so depending on the case, sometimes inducing vomiting can lead to aspiration into the lungs. The mainstay of treatment for Bromethalin toxicity is supportive care and decontamination. The pets need lots of IV fluids, multiple doses of activated charcoal every 4 to 6 hours to help limit the absorption of the toxin and may even need medication to treat seizures and brain swelling.

Usually they are in the hospital for several days, need emergency overnight care, and the outcome can vary. The treatment for a neurotoxin rodenticide is much more costly, aggressive, and time consuming than most of the anticoagulant toxicities that are seen. Since there is no antidote, we have to treat symptomatically and hope they do well until the effects of the toxin wear off. Cats seem to be much more sensitive to the bromethalin. A dog that is roughly 30 pounds has to ingest an ounce to be considered toxic. A standard 10 pound cat only needs 2 grams! That isn’t much at all. How do I know if my pet ate the bromethalin rodenticide?

If your pet has ingested a rodenticide, it is EXTREMELY important that you bring the packaging for the product with you to the vet so we can identify the active ingredient. Rodenticides look very similar, regardless of what they are made of. Bromethalin rodenticides can be green or blue just like the anticoagulant ones can. In order to treat your pet effectively and with the best chance of a positive outcome, we need to know what specifically they ate, how much they ate and when they ate it. When in doubt, bring your pet in. It is worse to wait and find out too late that they ate something dangerous! Color and shape does not distinguish between the rodenticides. Just look at these common ones… 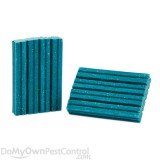