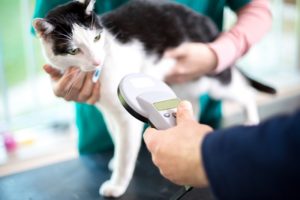 The American Humane Association estimates over 10 million dogs and cats are lost or stolen in the U.S. every year.

One in three pets will become lost at some point during their life.

From a study published in the Journal of the American Veterinary Medical Association, including 53 animal shelters across the U.S.:

Only 58% of the microchipped animals’ microchips had been registered in a database with their pet parent’s contact information.

One of our Veterinary Assistants previously worked at a shelter and had her pets microchipped through the shelter. Months later after the freshness of the Microchipping wore off, her beloved fur baby got out and was busy exploring as she was franticly looking. She went to animal control and local veterinary clinics to give them the information (picture, collar color, name, her contact information) and microchip number. When Animal control ran the chip number she gave them, they found NO information attached to that chip number. So, if her dog was found, they would have no way to return him to her.

Microchipping is an inexpensive and relatively painless procedure that implants a rice sized chip between your pet’s skin and the muscle below. Unlike people, animals have adequate space here, so much that chips can migrate over time. If lost, this chip can be scanned, a number read, and then the information registered for your pet can be accessed. In the end, your beloved fur kid is returned to you in no time.

Be sure to have recent pictures of your pet handy to go along with the registered chip and you shouldn’t become a Microchipping bad or ugly story.