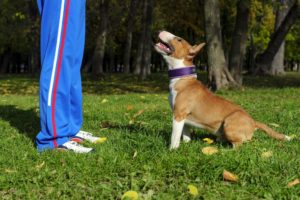 We recently received the question on Facebook: “My dog is ‘resource protecting’ me. He growls at my other dogs and cats when they come to me for attention. Any suggestions for calming him?”

The first step in dealing with any behavior situation is to check for underlying medical issues. Once an exam, and potentially other diagnostics, has shown that there are no medical issues, then we can focus on the behavior itself.

We have a few goals when dealing with an issue like this: 1) Teach the dog that the behavior is not correct, 2) Teach appropriate behavior and 3) Create a positive association with the other pets in the house.

For simplicity’s sake, we’ll pretend the aggressive dog is named “Fido”. We want to help Fido recognize that this behavior is undesirable. Correction in the form of yelling or tapping the head or nose can escalate the situation, so we want to avoid this. When Fido begins to growl, get up and walk away. Let Fido know that he loses the reward of your attention when he growls. If Fido only growls when he is there first, this will also give an opportunity for the other pets to come to you without Fido “protecting” you. He can then come up second and all can receive the appropriate attention. If Fido still growls even if he comes second, then we want to avoid attention for anyone when Fido is around. We will want to keep the dogs separate while working on training.

Now that we are working on stopping the incorrect behavior, we want to replace it with desirable behavior. To start, we will get back to the basics of a good sit and stay. Practice these behaviors individually and with other pets in the area. We want Fido and all the other dogs in the house to focus on you when doing these exercises, so they can ignore the other pets. This will make it so we can only give rewards (food, toys, attention) to calm and well-behaved dogs, thereby reinforcing the fact that acting inappropriately loses rewards.

Eventually, we will teach Fido to sit and focus on us when another dog comes near. We will pet Fido and the other dog and give them both treats. This will create positive feelings in both pets that are associated with the presence of the other dog. As Fido develops these positive associations, he will focus less and less on the other dog, eventually becoming accustomed to their presence. He will also learn that another dog getting attention doesn’t mean he won’t. The only way he loses attention and rewards is through his own bad behavior.

We are here to coach through these situations, so constant contact with your doctor can provide additional suggestions and little adjustments along the way. Behavior modification is not a one time fix. It takes time and patience, but with consistent techniques a solution can be found and we can get back to a happy and healthy home.