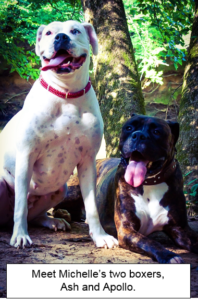 Coat: Short hair, often brown/fawn though can be white

History: Boxers originated in Germany around the turn of the 20th century. They were first recognized by the AKC in 1904. Boxers became popular in the United States after World War II, when American soldiers brought them home after the war.

Characteristics: Boxers are known for their high energy and playfulness. They typically integrate very well into families, especially those with children. This is because of their loyalty and protective nature, as well as their penance for continuing with puppy-like energy for many years of their lives.

It is important that Boxers have an outlet for their high energy. Regular and frequent walks are a must, and long play sessions are even better. Boxers typically interact well with other dogs, so visits to the dog park or play sessions with other dogs will help them burn off excess energy.

Health Concerns: Boxers have shorter faces and are prone to overheating, so they should not be left outside for extended periods of time. They are prone to health problems such as cancer, heart disease or hip dysplasia. White boxers are frequently deaf in at least one ear.

Why we love Boxers according to Michelle:

There are so many reasons why we love boxers. They are always willing to go out and play. When they see you, you will always be met with bright eyes and a happy face; boxers don’t just wag their nubs, they wag their whole bodies! Boxers are clowns of the dog world and will always find a way to convince you to get on the floor and roll around with them. Even though boxers are high energy they are also great couch potatoes and more than willing to cuddle up for a quick nap. Boxers cuddling skills are unmatched. Boxers are just wonderful and who can resist hugging and kissing on the most adorable mushed face around?